The Bridge on the Drina

There is this small town in the east of Republika Srpska in Bosnia, that nested at the confluence of the mighty river Drina and its small tributary Rzav. In this town, everything is small; the houses, the shops, the streets, the number of people inhabiting it. At first sight, it looks like frozen in time, with run-down facades, cracked roads and vehicles from the end of the last century. It looks like it hasn’t changed much over the past decades, as if it is lost and forgotten, or as if it simply defies catching the pace of the fast-changing modern world.

However, the history of Višegrad is long and grand, and historical events almost palpable. The religious conflicts are centuries old, and perhaps still ongoing in this part of Europe. From the times when Bosnia belonged to the medieval Serbian state under the Nemanjić dynasty, through the Ottoman and Austro-Hungarian occupation and the Second World War when it was grounds for battles against Germans, to Bosnian war in the early 1990s when the notorious massacres and ethnic cleansing took place, it has always been positioned at the imagined borders of empires, religions and beliefs. Višegrad was destined to heavily suffer century after century, however it stoically persisted, witnessing the complex times in Bosnian history and providing spaces in which various cultural models either clashed or coexisted. The embodiment of this can be found in the material heritage of the town, most obvious of which are the mosques and Orthodox churches that make its outline and are integral part of the town’s cultural landscapes. 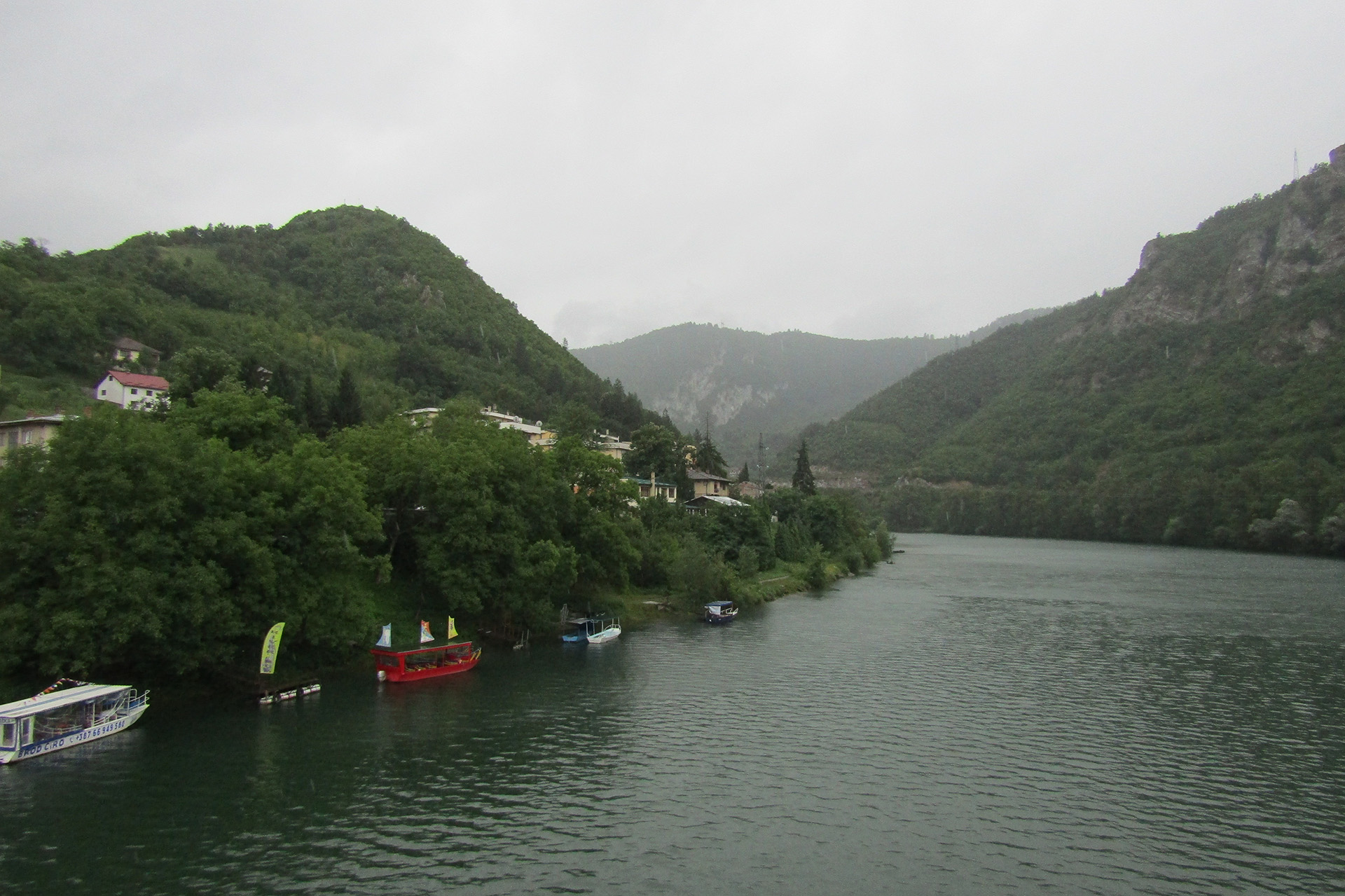 During the visit, I was asked why no one acknowledges the modern history of Višegrad. At first, I was taken aback by the question, but after giving it more thought I realised the comment was not unfounded. The history of Višegrad is highly politicised. When you listen to people (locals, the Bosnian Serbs and Serbians) speaking about the identity, history and the changing fortunes of the town, you would hear them speaking of the distant history, most likely mentioning the Ottoman period, rather than more recent history full of terrors and atrocities during the Yugoslav wars. This issue, I guess, is still very delicate and the only answer I was able to give is that the optimistic present wants to suppress the morbid past, not necessarily erasing it but simply not bringing it up unless particularly necessary.

Today, Višegrad is mostly populated by people of Serbian ethnicity, unlike before the Bosnian war, when in the town the majority of the population were Muslim. Often, however, it is referred to as ‘kasaba’, a word of Turkish origin meaning a town or a section of a rural or urban settlement. Until recently, the town was just a place through which the road was passing and in which travellers would stop to make a break, take the photo of its most famous landmark and just move on. Very rarely would someone come to stay, which left Višegrad’s hotels empty and tourism non existent. This, however changed in the past few years, particularly since the building of Andrićgrad, which has been attracting roughly 200,000 visitors annually.

When one visits Višegrad kasaba there are some unwritten rules to be followed. First, you must walk along its main street so that you can see and be be seen; second, you must walk across the bridge; third, you must have ćevapi (Turkish kebab) with diced onions and four, you must take your time to slowly sip black Turkish coffee (ćefiti or meračiti are the local terms for this kind of social activity). During our visit, we unintentionally followed these rules, starting from the amble across the famous bridge, the only tangible (land)mark of the distant past. 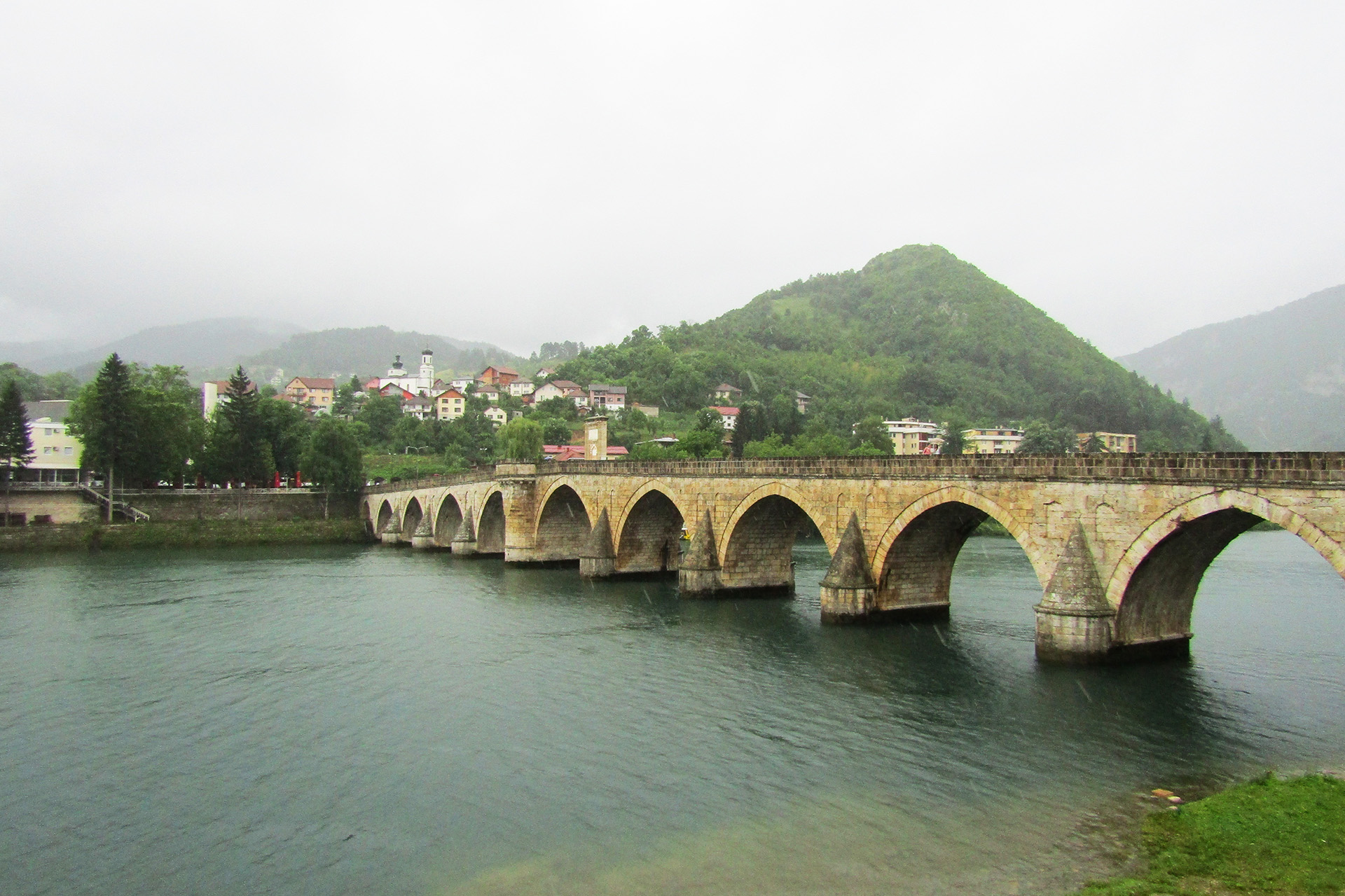 The bridge stood there in front of us, spanning the powerful and murky Drina, connecting the two sides of Višegrad. It has been the symbol of both unification and division, and now it stands as a reminder of and appeals for amity between the nations. We slowly approached ‘the pearl of the Drina’, soaking in the drizzle but hypnotised by its magnificence. I was turning around imagining it was 1516 when young Bajica from the nearby Sokolovići village was separated from his family. He was forced to convert to Islam getting the name Mehmed and ended up in janissaries serving the Ottoman rulers. The separation of the boy and his mother happened at the place by the river where we were standing at that moment. She only had the chance to tell him to never forget his family and the land he was coming from. Many years later, Bajica Sokolović returned to Višegrad as Sokollu Mehmed Pasha. Now distinguished Grand Vizier having been in service to several Ottoman sultans in the meantime, he ordered the bridge to be built at the location where he and his mother parted.

This is the story why and how the bridge was made, and what significance it has had across centuries. Designed by the well-known architect Mimar Sinan, it witnesses the architectural achievements of the powerful Ottoman empire. For its geopolitical position, and architectural, historical and cultural values, it was proclaimed a UNESCO world heritage site in 2007. The bridge was completely reconstructed and pedestrianised, and people can now take time while crossing it, admiring its grandeur and significance it has. In its middle part, I stopped at the sofa to have a better view of a stone portal that was dominating the bridge. The two chronograms written in Arabic script praised its endower, Mehmed Pasha Sokolović, which we found out from the local Romani children that wandered about the bridge and recited the script for a few coins in return. 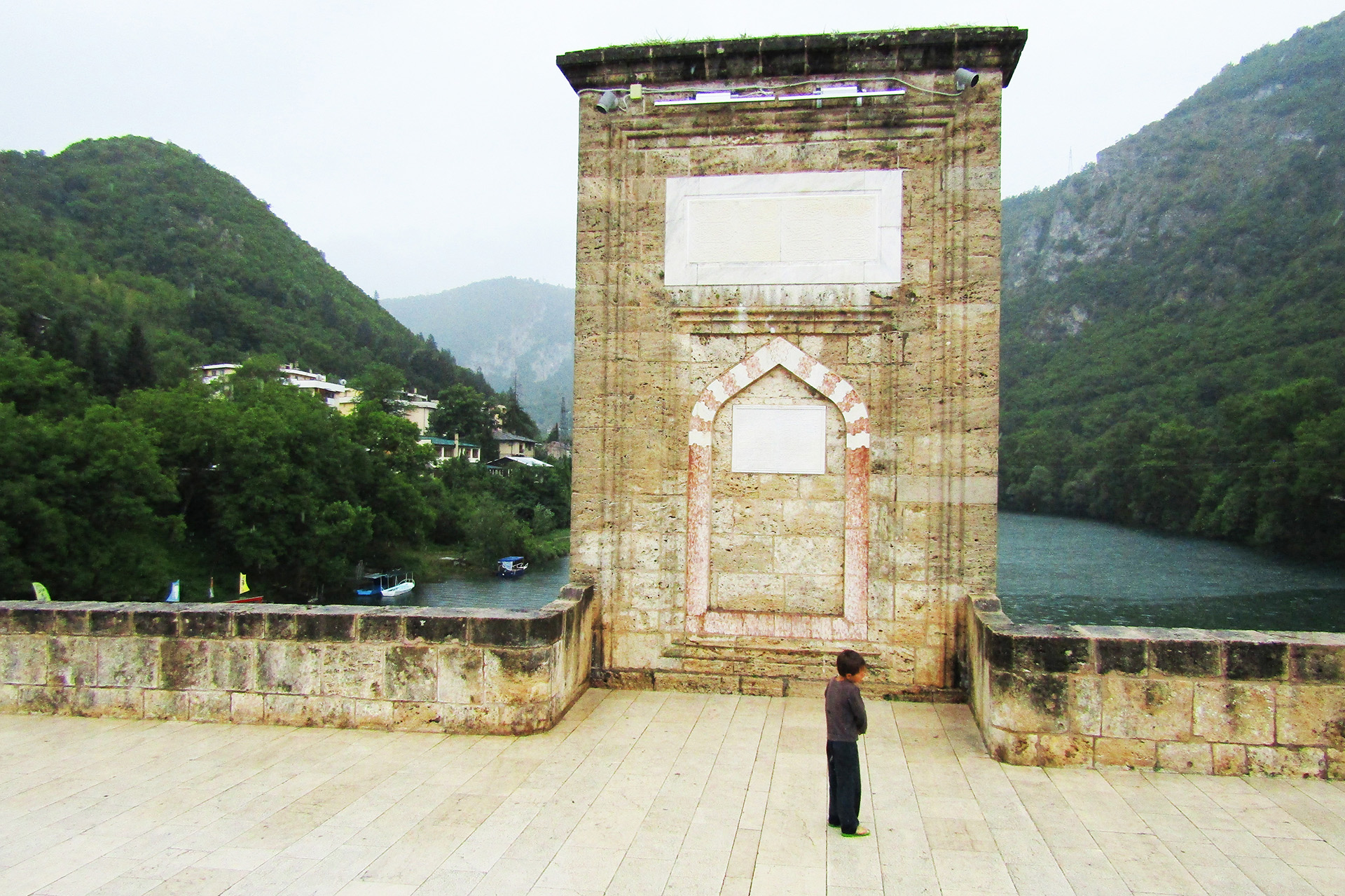 The story about the bridge was immortalised in the famous novel by the Serbian writer, Ivo Andrić. He was intrigued by the spiritual development of life in Bosnia under the Ottomans, which he was researching in depth and on which he based his doctoral thesis. Ivo spent most of his childhood in Višegrad, in a small house by the river that can be seen from the boat or the other bank of Drina, shyly appearing between other houses. He spent his days playing around or gazing at the Bridge through his bedroom window, finding inspiration in it and regularly chronicling the everyday life of the kasaba. This resulted in the publication of his novel “The Bridge on the Drina”, for which he was awarded the Nobel prize in 1961.

The novel chronologically covers four centuries of the Ottoman rule so no wonder it is loaded with Turkish terms (so called ‘turcisms’) one of which is in the original title itself – ćuprija (bridge). It has been translated into more than 40 languages which brought the author worldwide fame. Today, Ivo’s presence in town can be very much felt. The statues, the monuments, the graffiti on walls, the memorial classroom, the names of accommodation facilities, they are all reminders of the contribution that the single person made to Višegrad, its history and culture, as well as to the world literature. No wonder Kusturica decided to erect a town, as an homage to this Nobel prize laureate and name it after him.

“Life is an incomprehensible marvel, for it is continuously wasted and spend, yet nonetheless it lasts and endures, like the bridge on the Drina.” – Ivo Andrić