We crossed the Danube, then meandered through the forest of the national park heading towards one of the four former capitals of the Roman empire, when I decided to make a phone call. A male voice picked up and said: Jeremija speaking. I explained I was just calling to check if the museum was open. “Yes, we are here, awaiting you”, Jeremija answered. At this point I could not imagine that a very small museum in a very small town could make such a huge impact on me. I pictured Jeremija as a simple villager who had a love of bread making and decided to tell a story about it and, perhaps, display a tool or two, or whatever else he could think of, and call it a museum. But there was something in Jeremija’s voice. It was not a voice of a weary villager that spends his days labouring out in the fields, rather, it was cheerful and full of life and it was difficult to imagine that it belonged to an aged man.

Instead of following the road to Sirmium, we took the turn to Pećinci. The road took us to its end, where it intersected with the fields. On our left, the bus stop appeared as if placed right at the end of the world, and on the right, a cage-like entrance to a long ground-level building, resembling nothing more and nothing less but silos for storing wheat, corn and other harvested crops. It was hard to believe that this was our final destination – the museum of bread. That we were at the right place confirmed the image of the museum owner Jeremija hand in hand with a Serbian Nobel prize winner, Ivo Andrić. This juxtaposition of the unconventional museum building, the image of a great figure of Serbian literature and agricultural setting in which all of this was placed was a truly mind-boggling introduction to the artistic interpretation of the meanings and significance of bread in the Serbian culture. 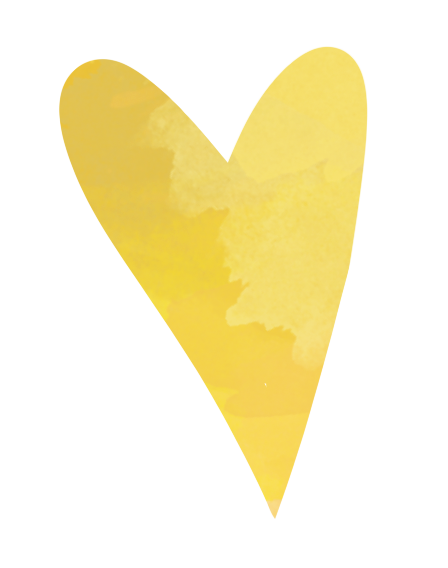 We rang the bell. The owner opened the door in the fashion of a good host and admitted us into a small conservatory. The cheerful voice now belonged to the body of a 70-year-old man with wild, snow white hair and a pair of piercing blue eyes. He sat us on chairs and wanted to know more about us, who we were, what we did, what we liked, where we’d met; just the very usual questions made part of a very unusual reception.

The chatter was interrupted by Jeremija’s wife who invited us for a walk through the collection. And this is where the story about Jeremija and bread unfolded…

Jeremija is an artist-ethnographer who often travels and paints. These are most often the motives of rural, rustic, traditional Serbia which is slowly fading away: the old farmhouses, the windmills, the old stoves, the sheds. Jeremija’s work captures the aesthetic, ethnographic and traditional vales of the people and place, the ones which have not been protected by the government, and through his artistic expression he aims to immortalise them. In his work, however, Jeremija is mostly interested in ritual and cult bread (pogača in Serbian). In its honour, he decided to open the museum, the designing of which he approached in a similar way as he approaches painting. The museum, Jeremija’s life work, is conceptualised in such way to present the life cycle of a wheat grain – “From soil, over bread to the heavens”.

The so called ‘bread street’ starts with the archaeological collection of the tillage tools from pre-history and the Roman period between 100 AD and 500 AD. For the proximity of Sirmium, some of the archaeological material from this period have been ploughed out in the fields nearby and have been conserved in the museum. In order to popularise science, the museum hosts a number of faithful copies of well-known artefacts, like that of the Goddess of fertility which is displayed in the Museum of Vojvodina. The section on the harvest displays Neolithic, Celtic or Roman wheat milling tools, the machines used in domestic households from the beginning of 20th century, the bread scales, as well as the old baking ovens (furune in Serbian) which Jeremija found in Serbian villages and in which he found inspiration for his paintings.

Bread is very important in all cultures. In Serbia in particular, it is the old traditional custom to make liturgical bread for big religious holidays such as Christmas, Easter and Slava, the family patron’s day. It used to be made for child’s birth and as a gift for newlyweds, an antecedent of today’s wedding cake. All the breads have a spiritual meaning. In Serbian culture there is a saying that the whole human life occurs between the bead for a newborn and the bread for the deceased. 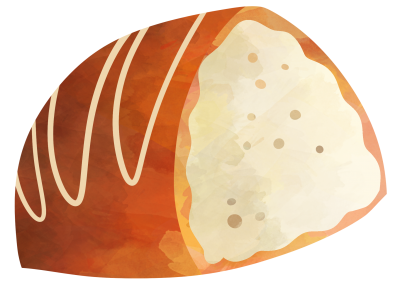 The path led us out of the museum to the small chapel in the garden. It was still work in progress; the ceiling was covered in frescoes, but the walls were still undone, as well as the floor. Jeremija explained that the floor was made of wooden logs of various trees that he had collected on his travels throughout Serbia. Walking on the floor, he explained, would be like walking through whole Serbia. The frescoes on the ceiling depict the pre-Christian and pagan divinity, the saints holding the bread, the Nemanjić dynasty and Christ converting the pagans into Christianity. 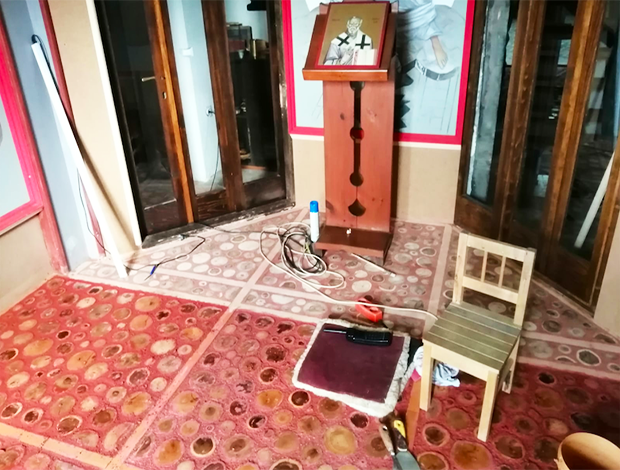 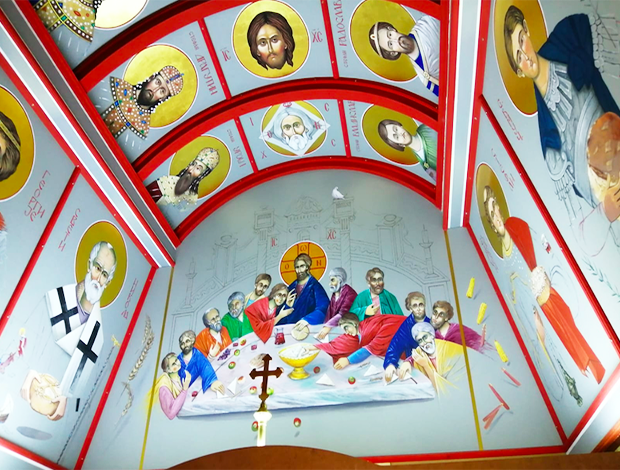 We finished our visit in a warm and cosy dining room where the family admit guests and celebrate their Slava. In the olden days, the kitchen was referred to as ‘the house’, as the hearth of home and the place where the members of the family would gather and prepare food, and from which the light and warmth of home would radiate. On one of the walls was displayed the document certifying that Serbian Slava had been put under the government protection as well as inscribed in the Unesco’s list of the world’s intangible cultural heritage. This is how we found out that Jeremija made his contributions to this achievement. He also brought to our attention the traditional Vojvodinian cipovka, ‘the bread that laughs at the moon,’ and the recent attempts to protect its 300-year-old recipe as an intangible cultural heritage.

The playful ginger cat (which never meows) waited for us after vacating the dining room. Having journeyed through the lifecycle of wheat, we were convinced that we stood at a spot of invaluable cultural importance. Jeremija’s museum of bread is not just a tiny pop-up bread exhibition (as I might have thought before my visit), rather, it is a cultural treasure embodied in material artefacts brought together through decades of dedicated collection and creation, and led by a vision of an artistic mind. No wonder that the European museum forum nominated it for the Museum of the Year and the International Council of museums took it under its auspices for the outstanding value it has within the Vojvodinian, Serbian and the world’s cultural spaces.