The non-German treasures of Potsdam

This was my third visit to Berlin. This time it was solely a business visit, Tourism Organisation of Novi Sad was exhibiting at ITB Berlin, the world’s biggest travel trade show, and as part of my job I was invited to present my hometown. We had a very busy schedule, however we had a small window for ‘sightseeing’. Thinking how to cleverly use it, my colleague suggested a visit to Berlin’s first neighbour, Potsdam. I had never been before so the proposal sounded inviting. And so we did it, we hopped on the fast train connecting Charlottenburg and Potsdam and in 15 minutes we were there, in the royal city.

It was strange though, to see the capital so quiet. It was cloudy and drizzly, many shops were closed, the traffic was less busy and something was definitely going on. But what? My colleague explained that Berlin just became the first federal state (out of 16) in Germany to declare the International Women’s Day a public holiday. It was nice to witness the big change when the city with the least number of public holidays got another day off in their calendar. But not only that. The date bears a strong political message whatsoever, granting women recognition for their achievements and enlisting Berlin on a very short list of countries that gave it a public holiday status.

Anyway, the train soon dropped us off at the main train station of Potsdam. The first stop was the info centre (of course). For the first time visitors who have no clue about the place, it is somewhat mandatory to get an idea of what it has to offer and which way to go. So right there I found out that the charming Brandenburg’s capital is a historically significant place, where the aesthetics of natural landscapes and architecture were combined together during the Age of Enlightenment and up to the present day give a picture of a very green, well planned, carefully designed, highbrow place. German Kaiser Wilhelm II and the Prussian royalty used to live there so no wonder the city is dominated by numerous beautifully decorated parks and impressive palaces. For me, even more fascinating is the fact that Potsdam has an important non-German legacy, so important they have been rightfully put under UNESCO protection. In XVII century Potsdam became the centre of European immigration, attracting mostly French, Dutch, Russians and Bohemians into the city, and so this was something I wanted to see, explore and find out how these migrations and cultural interminglings happened.

The blustery weather was not particularly welcoming, but it didn’t stop us either. Fighting with strong air currents and rain, we walked towards the north of the city, along the Friedrich-Ebert street, eventually reaching the Russian colony of Alexandrowka. It is a rural ambient area amidst residential houses, very much unlike its surroundings. It was built in the early XIX century on the command of Kaiser Wilhelm III to accommodate Russian immigrants and as a symbol of Russian-Prussian newly established friendship. Initially, they accommodated singers of the First Prussian Regiment of the Guards, but Russian families lived in the houses until recently (the last member of the enclave died in 2008). Before they belonged to the crown, however, they are now all private property. UNESCO enlisted this colony made up of 13 wooden houses as a world heritage site in 1999. 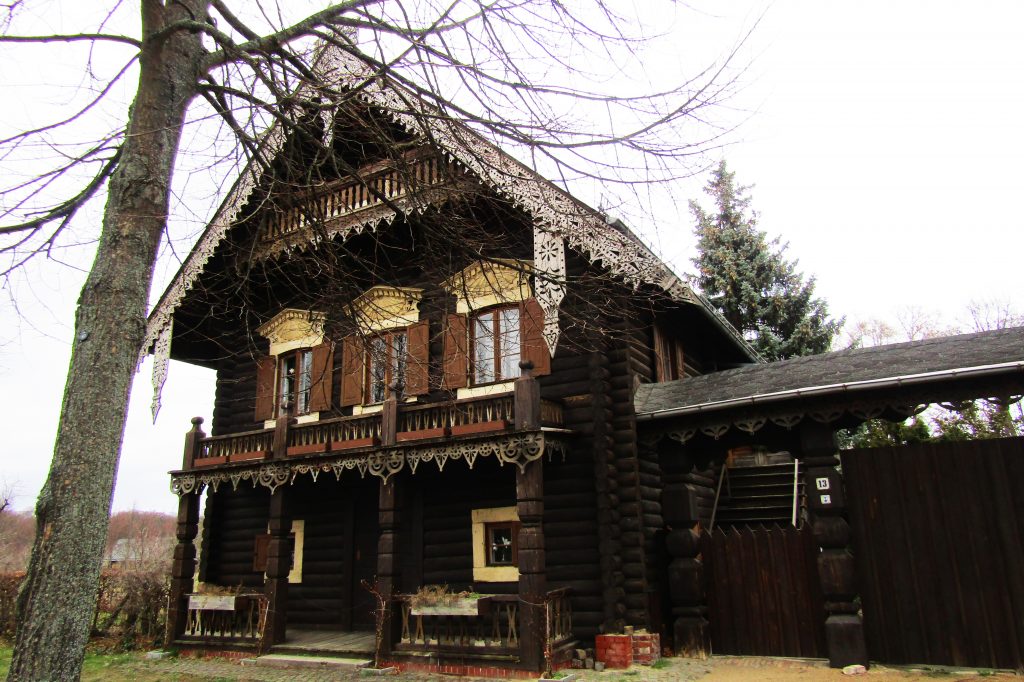 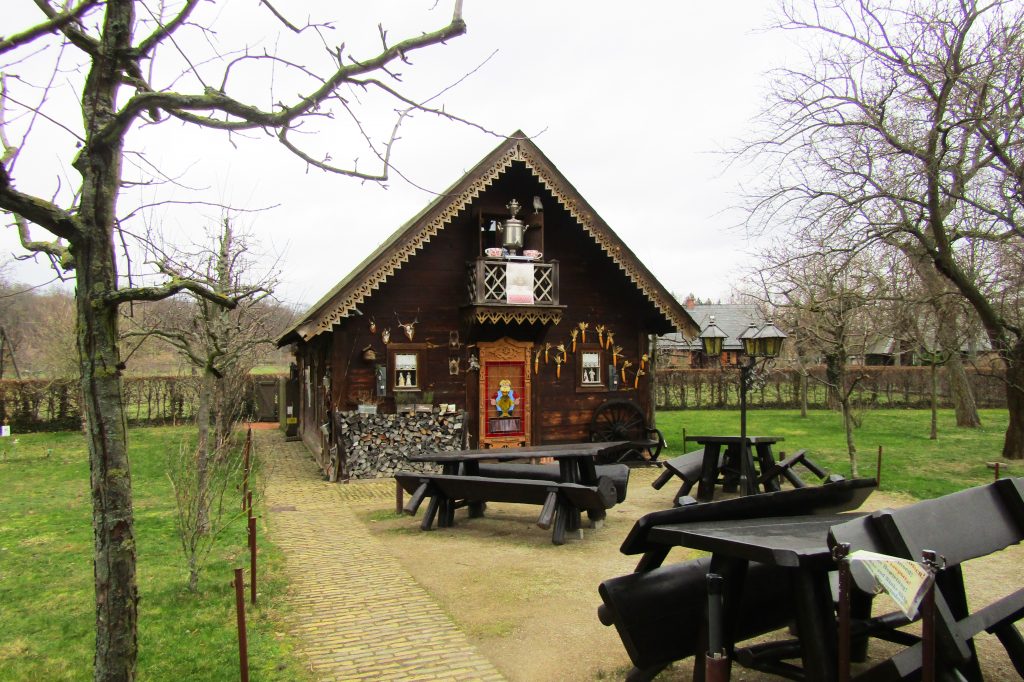 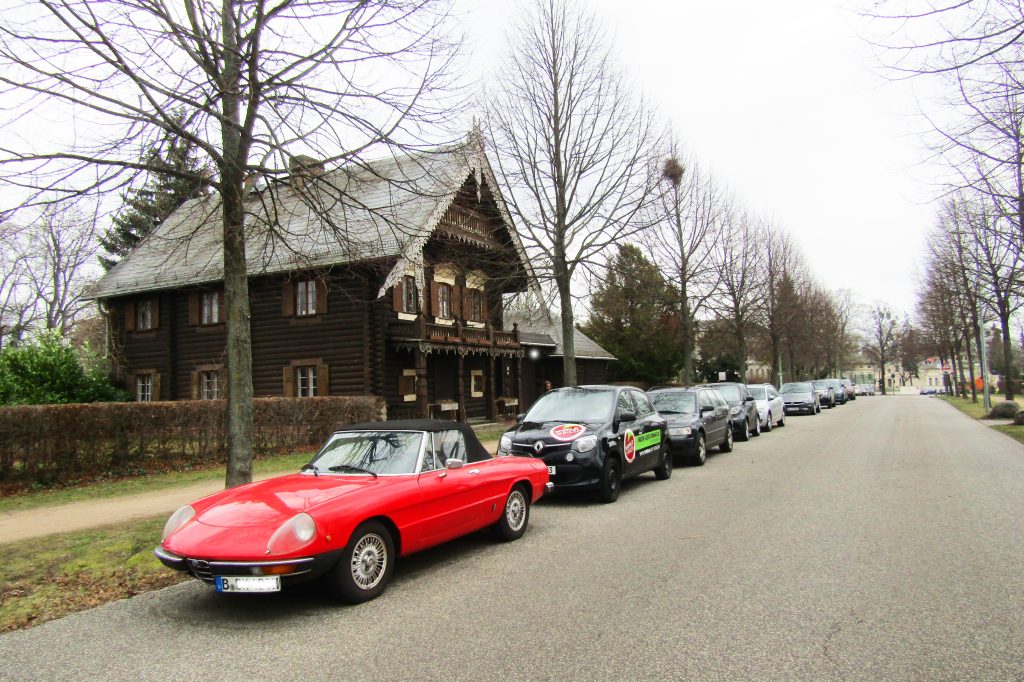 I wandered about the area, closely examining all the details and architecture of the wooden houses. Many details were decorating them, from small figurines typical to Russia to tools hung on the sides and icons of various saints. To my great surprise, I spotted the image of the monastery, carved in a wooden board, that was very familiar to me and which I was sure I had visited in the past. It was a monastery built in the rocks in Montenegro, a site of the Orthodox pilgrimage, famous for miraculous powers of Saint Basil of Ostrog, its builder. I still wonder if the Germans thought this was a Russian saint? Or maybe Russians brought it there? I regret now for not asking the ladies in the museum, but sometimes it is better not to know. For some reason, it was meant to be placed there. 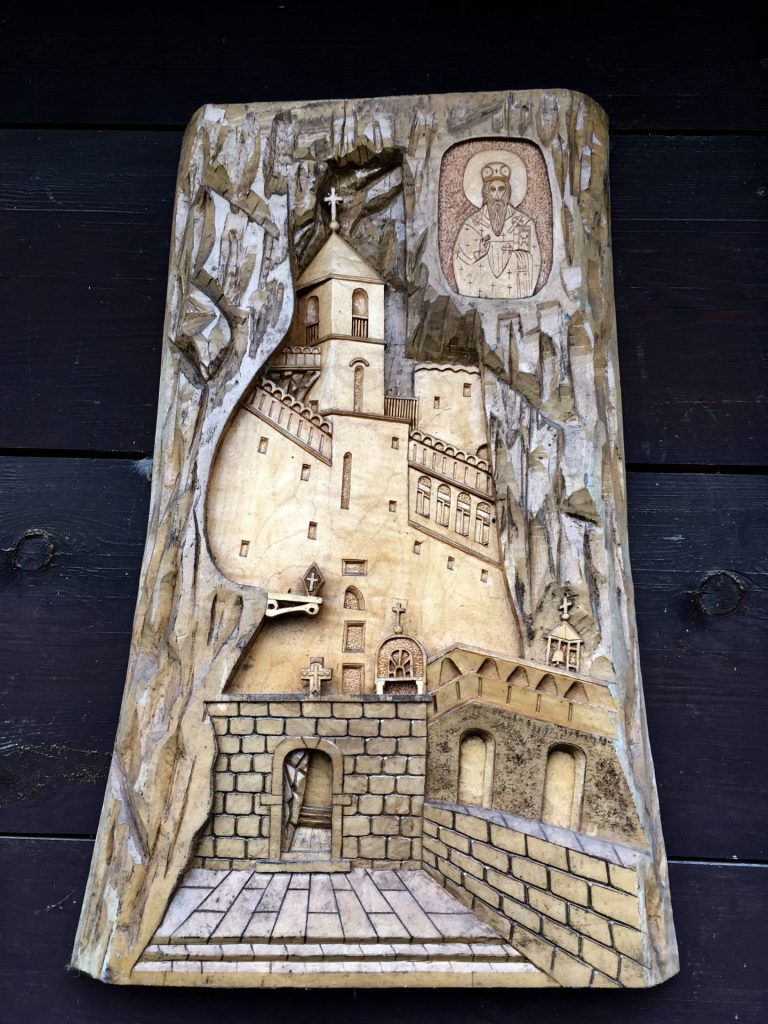 We walked further down the street, towards the church that nested on top of a small hill in 1829. It is the oldest Russian orthodox church in Germany, named after the Kievan Rus Alexander Nevsky. Its colours and Byzantine shapes were brightening up the grim day, however it was closed and we couldn’t peek in. Insteaad, we circled it twice and moved on, past the small museum which tells a story of the history of the village and a small café that serves delish Russian treats. 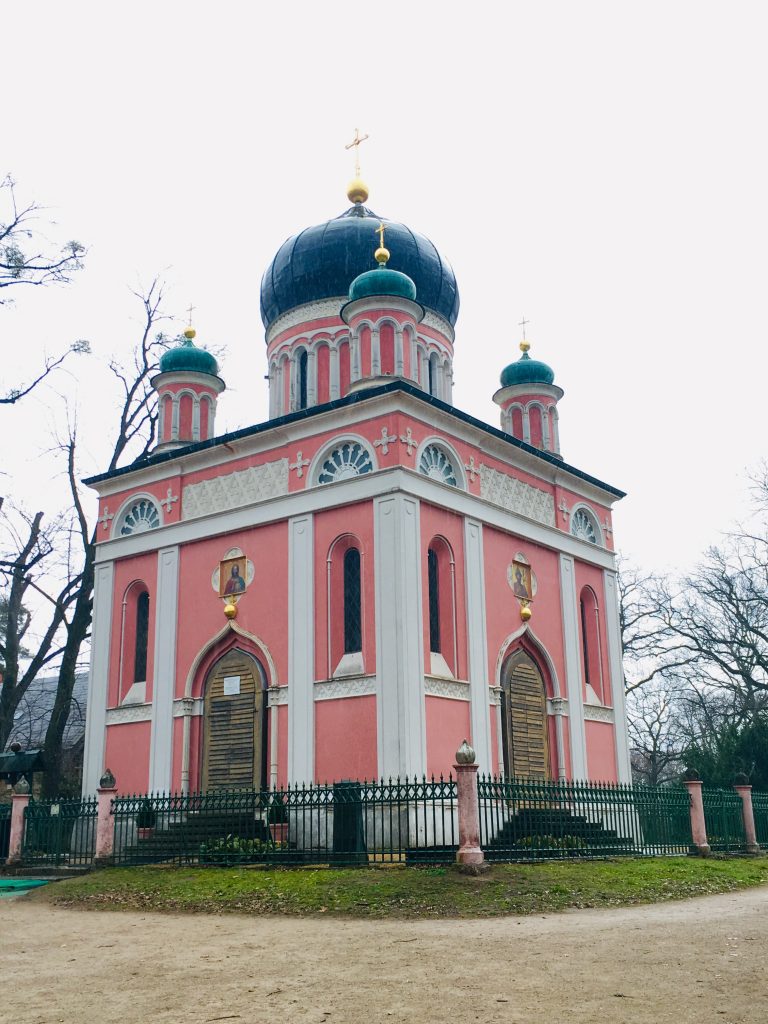 On the way back from Alexandrowka, we passed through the Nauener Tor, one of the three standing city gates and entered another interesting site, the Dutch Quarter (Holländisches Viertel). The area comprises two streets clustered around four squares which are home to some 130 red-bricked houses. They were built by the architect Jan Bouman in the mid XVIII century on the command of the Prussian king Frederick Wilhelm I to accommodate the Dutch craftsmen and artisans that were invited to settle here as an expansion of the garrison town. To design the houses in the typical Dutch gambrel style was the King’s hospitable act as he wanted to make new settlers feel at home. 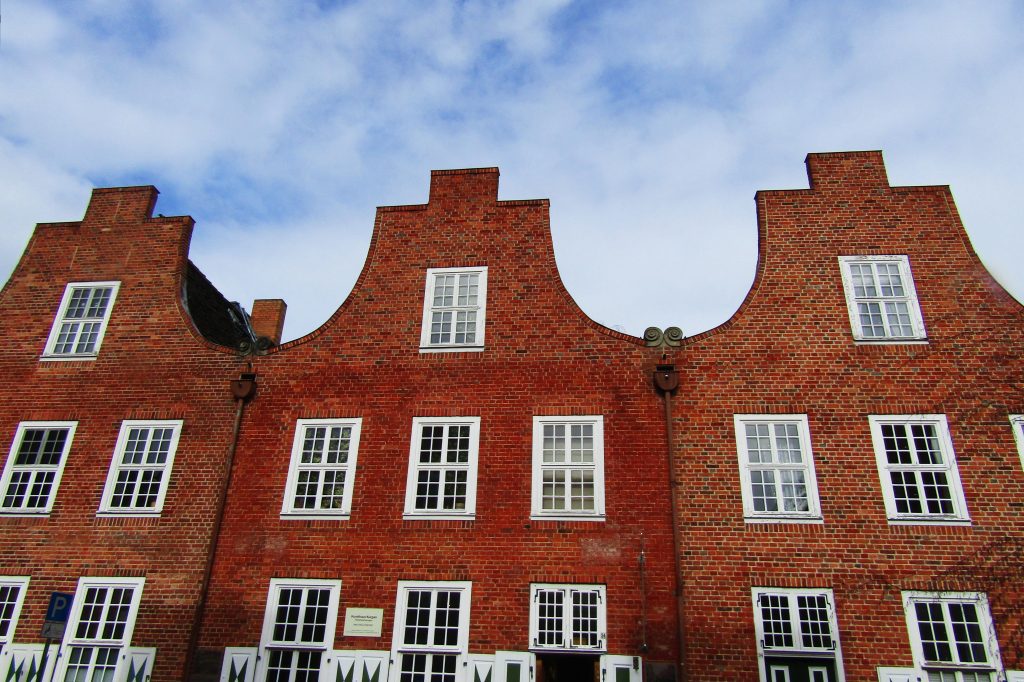 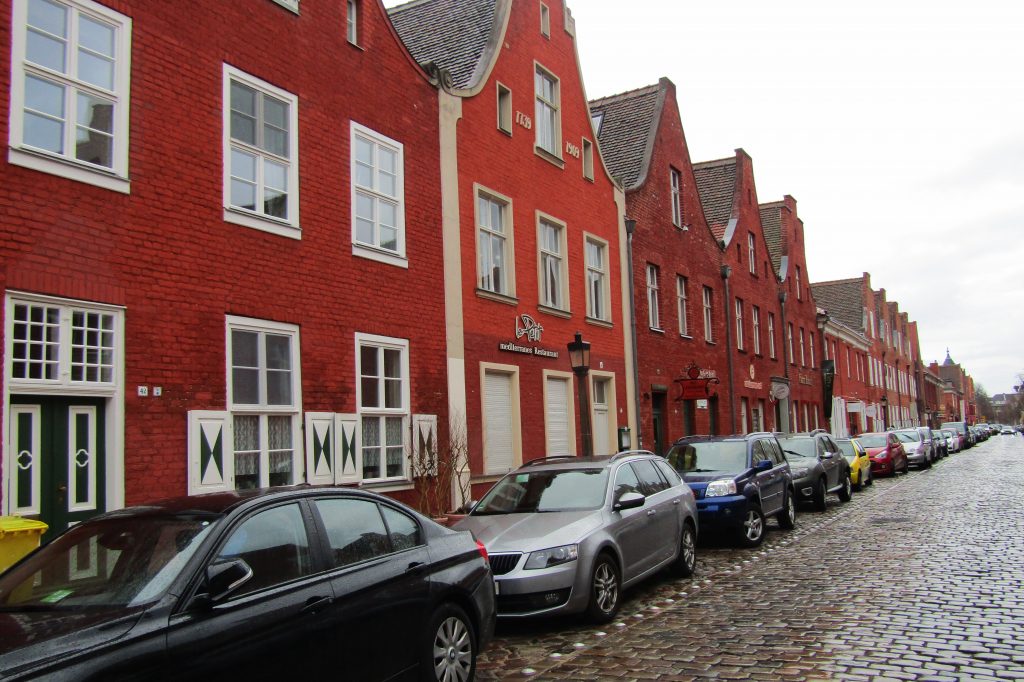 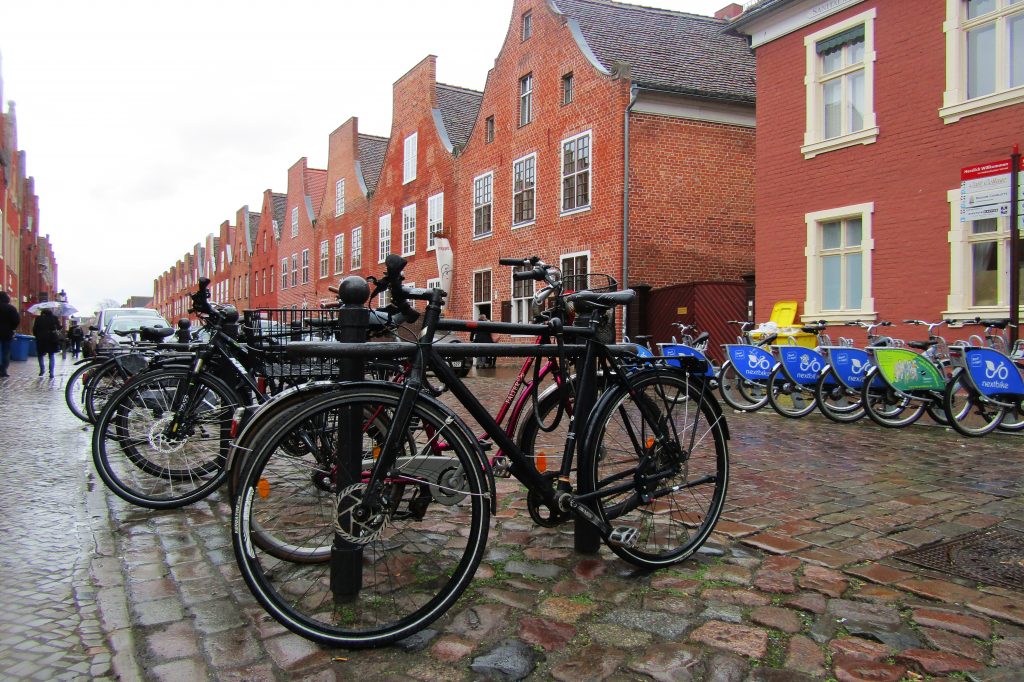 Today, this area is one of Potsdam’s most visited quarters. The area boasts numerous arts and crafts shops, galleries, pastries, workshops, hairdressers and cosy cafés, as well as Jan-Bouman-Haus museum, which interprets the period when the area was built and lifestyle of its inhabitants. The low-standing windows allowed me to peek into the interior of houses so I could spot the textiles, cups, pots, jewelry, candles, books or food served on tables. I was hoping to find a Dutch cheese shop but I had no luck. The strong presence and preservation of Dutch culture is also evident in festivals taking place throughout the year, for example the tulip festival in April, the potters’ market in September and the Dutch Christmas market in the advent period. I am sure one can very easily forget they are not really in the Netherlands, but in the heart of Germany. 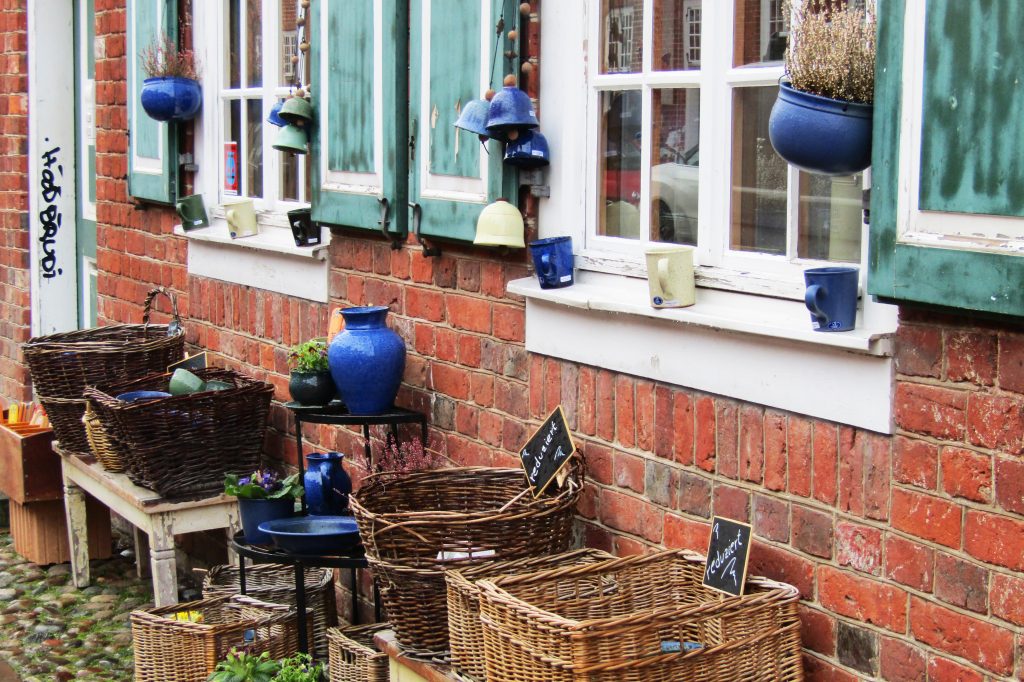 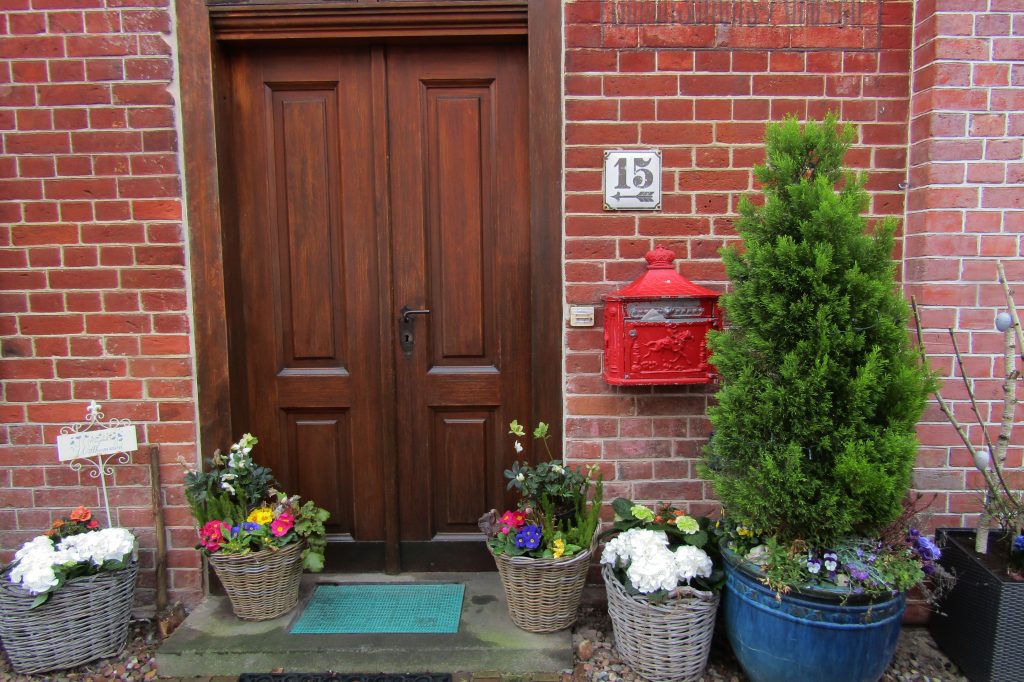 Wander about the Sansoucci park, the UNESCO world heritage site

What else, visit Berlin : )