Inside the Chernobyl Exclusion Zone

It was an early Orthodox Easter morning when we set off from Kiev towards Belarus borders to visit that place called a post-apocalyptic world by the many. It was 28th April 2019, 33 years and two days after the infamous Chernobyl nuclear disaster, an event that is claimed to have marked the implosion of the Soviet empire and changed lives of countless humans.

So there we were, integrating into the group of people who wanted to see the Exclusion Zone. We reached the first checkpoint “Dytiatky”, had our passports checked by the police and got Geiger counters and dosimetres which we hung around our necks. The van doors closed with a rattling sound, the ramp lifted before us and the next moment we were in the buffer zone. “I’m very excited, I hope to see a radioactive bear, remember that bear from the movie Annihilation?”, my partner observed. Just thought of a petrifying mutated bear was already horrible enough and I refrained myself from further thinking of the Chernobyl syndrome that took thousands and thousands of lives in the years following the disaster. Instead, I let my eyesight reach the depths of the forest stretching over the sandy soil on both sides of the road scarred with multiple cracks. Our guide explained the narrow sideroads used to lead to the camps which were the base for liquidators. They were ‘the heroes’ of the operation – the soldiers, miners and factory workers that were ready to sacrifice their lives by partaking in the liquidation of the Chernobyl accident, washing off the contaminated material in order to prevent the negative effects reaching even larger scales.

The most populous village in the exclusion zone used to be Zalissya, accommodating around three thousand people back in the 80s. It is where we made our first stop. We walked towards a small hospital for women that was located just off the main road. Our every step was followed by the chirping of sparrows and cuckooing of coocoos, and we would occasionally entangle ourselves in the cobweb that was filling up the spaces between the abandoned houses. The interior of the hospital was in the state of mess, the floor was full of dirt and dust, we walked on the broken glass, tiles and creaky wood, stepping among handwritten reports, scripts, test tubes, medication bottles and ampules that were scattered all over the floor. The strong medicinal smell was still very present, and the atmosphere of the past almost palpable. The old, rusty gynaecological bed appeared in front of me, and the sight of it, combined with the beeping sound of our Geiger counters, gave me unpleasant shivers.

The same feeling I had when we walked into the kindergarten of the next village. The bunk beds, plastic dolls, sandals, books and drawings were still kept in rooms. The air was stale and it smelled of a damp basement. Occasional fragrances of wood and dust entered my nostrils. I now wondered how radiation never killed the smells but rather let them exist as intensively several decades after. A plastic bunny toy was sitting in the window pane which reminded me it was Easter and I gazed at it for some time and wondered: Where are these children today? Was it Easter for them too? How are they, and what are their lives like? These were some of the thoughts that crossed my mind. These people must be of my age now, I was only five when the accident happened. My thoughts were interrupted by the two people that walked into the room. “There are several things I am doubting”, one of them said. They were discussing the metal beds and insinuating this was not an authentic setting, they didn’t believe such beds were still in use in the 80s. Coming from the developed West, they surely don’t know what life was like in former Soviet countries, let alone in small, rural environments. I could tell them for sure what beds in nurseries, kindergartens and hospitals looked like in ex-Yugoslavia for example – not much different from these.

The road took us further through the Red Forest area much of which was bulldozed and buried underground due to high levels of absorbed radiation. Despite still being the most contaminated area, nature here seems to have not only survived but flourished due to a significant reduction of human impact. The vegetation has adapted to the contaminated environment and found its way to dominating the landscapes. The zone has become a ‘radioecological reserve’, a unique sanctuary for a wide range of plant and animal species. Storks, wild boars, lynx, fox, wolves, even bears have been reported in the area. There were a number of insects crawling around, like large size ants and neon green lizards. I was hoping to see if not a bear (not the one from Annihilation movie though), then a wolf at least, however, I had no luck. Instead, we saw a number of stray dogs roaming around the zone, which surely resembled starving grey wolves.

We finally arrived in Pripyat, the town that was entirely evacuated in only 36 hours after the explosion of the Nuclear Reactor 4. Now, it was a ghost town where silence has much to say. It tells a story of the night when hydrogen and graphite explosions scattered nuclear fuel and radioactive debris across the large part of Europe, affecting not only humans but also plants, animals, air, soil, roads, houses. The event changed the everyday lives of people, their identities, their histories. The people were forced to fight against the invisible enemy. We were walking along the street which holds the name of the Soviet atomic bomb creator Igor Kurchatov. It started to rain which only made the grim atmosphere even grimmer, and we eventually ended up being entirely engrossed in the place… We kept walking in silence… 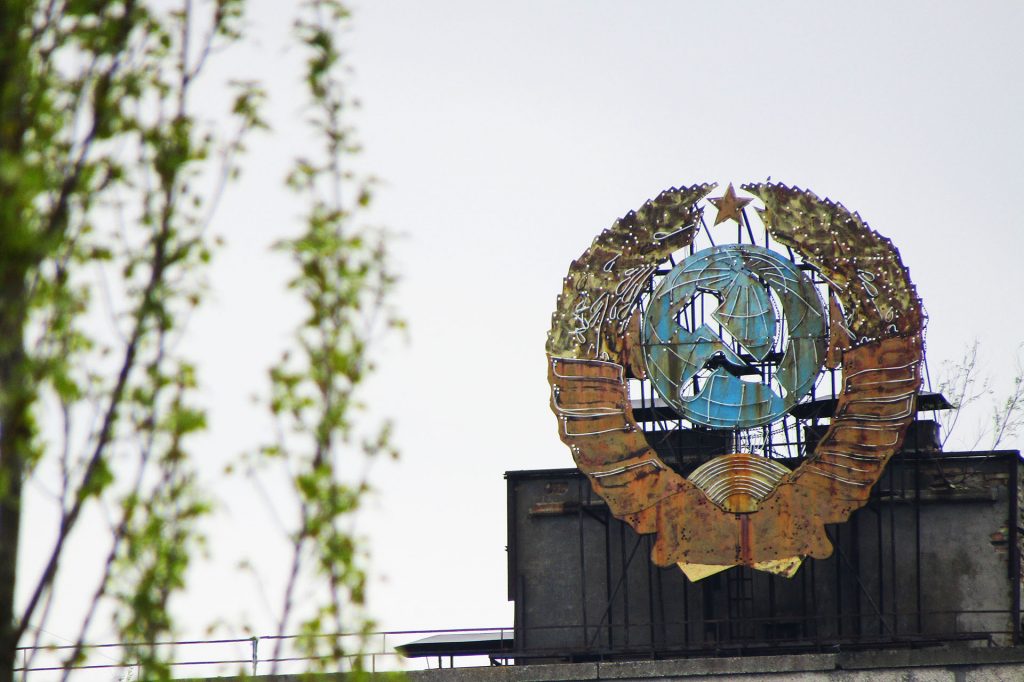